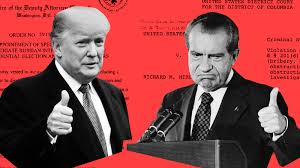 Unless House Speaker Nancy Pelosi has a card up her sleeve that she has yet to play, the Democrats have miscalculated and truly botched their impeachment effort.

In the White House TELCON memorandum of their July 25, 2019, phone conversation, there are three elisions in the text as U.S. President Donald J Trump tries to explain the favor he is asking of Ukraine President Volodymyr Zelenskiy:

I guess you have one of your wealthy people

The server, they say Ukraine has it. There are a lot of things that went on, the whole situation. I think you’re surrounding yourself with some of the same people. I would like to have the Attorney General call you or your people and I would like you to get to the bottom of it. As you saw yesterday, that whole nonsense ended with a very poor performance by a man named Robert Mueller, an incompetent performance, but they say a lot of it started with Ukraine. Whatever you can do, it’s very important that you do it if that’s possible.

I heard you had a prosecutor who was very good and he was shut down and that’s really unfair. A lot of people are talking about that, the way they shut your very good prosecutor down and you had some very bad people involved. Mr. Giuliani is a highly respected man. He was the mayor of New York City, a great mayor, and I would like him to call you. I will ask him to call you along with the Attorney General. Rudy very much knows what’s happening and he is a very capable guy. If you could speak to him that would be great. The former ambassador from the United States, the woman, was bad news and the people she was dealing with in the Ukraine were bad news so I just want to let you know that. The other thing, There’s a lot of talk about Biden’s son, that Biden stopped the prosecution and a lot of people want to find out about that so whatever you can do with the Attorney General would be great. Biden went around bragging that he stopped the prosecution so if you can look into it

It sounds horrible to me.

It is possible that there still exists a true transcript of that July 25 conversation?

Those elisions may be the equivalent of the White House tapes that Nixon tried to withhold from Congress during the Watergate investigations.

We know from the note of “Caution” on the first page of the five-page TELCON summary that it is not a verbatim transcript of the conversation, in spite of President Trump’s claim that it is. The call lasted a half-hour but the released text covers about ten minutes. We know from the testimony of Col. Vindman, who listened in on the entire call in the White House situation room, that he had pushed to have some of the omissions to be reinserted in the call summary. He testified that the third ellipsis omitted Trump claiming there were recordings of Joe Biden discussing corruption in Ukraine and that the “company” cited actually refers to the Ukrainian gas company Burisma, but the company name was edited out.

Will Speaker Pelosi refuse to forward the articles of impeachment to the senate until the White House comes clean? That might drive the president over the edge!