…I think that the south end of town is getting blighted by a lot of refugees and different dialects coming into the school. I think the children are having — 124 dialects in one school system is a little rough. And I think it’s a big strain on the teachers. And so I would like to see — I know they’ve done the Vista neighborhood push to try to get more money in there. But I think they caused the problem to begin with.     —Judy Peavey-Derr, responding to an Idaho Statesman reader panel request to explain her charge that Mayor Bieter has neglected south and west Boise

In the interest of full disclosure: In her apparent quest to be elected to every local seat of government, in 1998 Judy P-D ended my brief political career as the biking ACHD commissioner who didn’t own a car. When a liberal looks politically promising in Boise, the tea-party types roll out J P-D. The campaign was a nasty affair; P-D and her repugnican handlers played their dirty tricks. People called with tales to tell; I refused to mud-wrestle.

They’ve rolled her out again, with a full, skin-deep makeover. The nastiness is still there not far beneath the surface, as demonstrated by yesterday’s diatribe.

Statesman reader responses to J P-D’s crass comments have been reassuring. Perhaps the best was this link to a video illustrating the success of a refugee who, like most, came here with nothing: 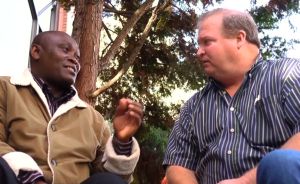 Boise’s refugee resettlement program is one of the most successful in the country. It has added some of our most productive citizens to the community as well as some much-needed cultural leavening.

As some readers note, J P-D’s comments may well be an intentional Trump card played to win the votes of the anti-immigration crowd, several of whom raised their ugliness among the Statesman comments. One wag noted that there was, perhaps intentionally, some syntactical confusion of “dialect” with “language” and “refugee” with “immigrant.”

We have only to recall the generosity Boiseans have shown for the unfortunate refugees whose enterprising international market burned down, to realize how wrong J P-D is about our town.