Yesterday morning, I received my monthly eNews from Sravasti Abbey, which is celebrating its 10th anniversary this month. Among the many colorful photos illustrating the monastery’s remarkable decade of progress, the one above caught my eye.

Ven. Thubten Chodron and her two cats, shared our Boise home for several months during her search for an abbey site. She had been encouraged to establish a US abbey for training nuns in the lineage of the Dalai Lama, who ordained her 30 years ago. Because of her close association with Treasure Valley Dharma Friends, she first hoped to locate the abbey in southwestern Idaho. As it turned out, a beautiful site became available north of Spokane, near Newport, WA, just over the state line from Old Town, Idaho.

While most of my Buddhist practice has been in the Vietnamese Zen tradition of Thich Nhat Hanh, we’ve had the pleasure over the years to host several Tibetan monks in addition to Chodron. Several years ago, we hosted Khensur Rinpoche and his translator, in Boise to give Dharma talks on his way to bless the Washington land Chodron had found for the abbey. Tulku Damsho Rinpoche and his attendant, Lama Sonam, stayed with us this past week while in Boise to give a commentary on Gampopa’s “Jewel Ornament of Liberation.”

For a couple evenings, I listened with about 30 Treasure Valley Dharma Friends as the Tulku recited his commentary in Tibetan, referring occasionally to his notes on the iPad in front of him. He would speak for a minute or two, then pause for translation and commentary by Jules Levenson, a professor from Naropa, the Buddhist university in Boulder, Colorado.

Gampopa was a student of Milarepa, the 12th-century CE Tibetan yogi and Buddhist lama. Tulku Damcho is said to be the reincarnation of Lama Tsokni, who led thousands of austere, fasting retreats in Tibet  dedicated to the Thousand-Armed Bodhisattva of Great Compassion, before the Chinese invasion. Reincarnation has not been an important tenet in my personal understanding of the Buddha’s teachings. Those teaching were not written down until several hundred years after Buddha’s death, but they are passed on in practice and orally from teacher to student in an unbroken line from students of the Buddha down to the present. Listening to Prof. Levenson translate Damcho’s commentary on the 12th-century “Jewel Ornament,” itself elucidating the then-1600-year-old teachings of the Buddha, I was witnessing the reincarnation of ancient thought.

John Rember’s persistent warnings to his writing students of the dangers of metaphor came to mind: “Metaphors damage your ability just to witness the world.” I think that’s what the 8th-century Zen monk Lin Chi (AKA Linji, Lam Te, Rinzai) was getting at when he wrote:

Followers of the Way,
Buddha is not to be attained.
There is no real Dharma;
it is all but surface manifestations,
like printed letters on a sign board to indicate the Way.

I slipped a copy of this iconoclastic Zen metaphor to the Tulku as he left for Shambhala meditation center in Colorado. 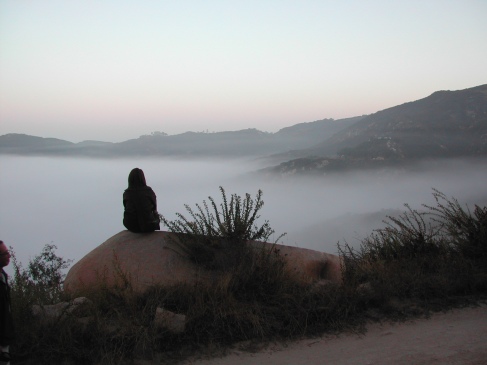 …from a Zen brother:

There is this deep understanding that everything is always perfect simply because it is. It is not an understanding of the mind or logic, it is rooted completely in the heart. Although, like all of us, much spiritual practice, reading, meditation and retreats have occurred, this lesson comes directly from life:

Enough times seeing that what I thought was horrible and totally unacceptable turned out to strangely be exactly what was needed for the very best results.

Enough times learning that devastating pain seemed to be the most brilliant spiritual teacher of all.

Enough times seeing that those who I most feared or resisted were all actually just me in different clothes and coming to this seemingly other me with the exact perfect lesson.

Enough times to turn all my thoughts and beliefs and ideas completely upside down, until I finally saw that they were all, all of them, total illusion, blindness and ignorance.

It doesn’t mean I don’t live my life in service to others and work for the benefit of all. But I also know that I don’t know what that means.

It doesn’t mean deep grief and sadness and even occasionally a little anger don’t arise when I forget how perfect this seemingly crazy world is and always has been.

There are no others. There never has been a hair’s breadth of separation anywhere, ever. And yet … and yet this illusion appears so very real. It’s not surprising that it fools us so completely. The best solution may be to rest in this silence that has no answers, no questions, no ideas or beliefs. To help others knowing full well there is no other we are helping. We are only helping our self in the amazingly varied costumes we appear in, just as we are being helped in return. It’s not something the mind can really comprehend, but it is the best help we can offer. This is helping in truth.

Much Love and Many Bows to you, as myself in all its amazing variety and diversity, from warlords, corporate chiefs, politicians, trees, mountains and insects to the many gentle spiritual Bodhisattvas (including my wonderful cat Zen) who through their love help to shatter the illusion that is solely responsible for all human suffering.